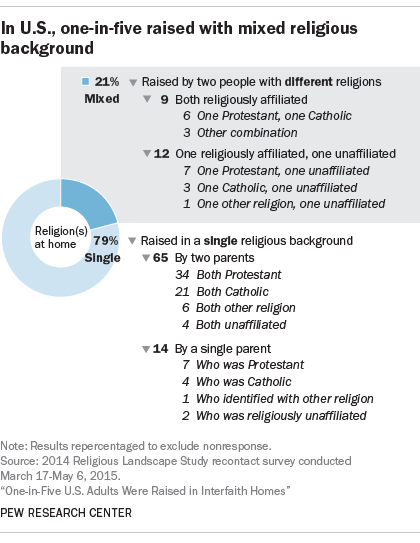 Growing up in a dual religion family is not always easy, but it is very rewarding. I truly believe that I am the person that I am today because of it.

My Father was married before he met my Mother. He had four children who were all brought up in the Lutheran Church. After his wife passed away from cancer, he married my Mother, who is Catholic, and together they had me.

While Catholics and Lutherans are very similar in many of their beliefs, there are still several differences. These differences were all explained to me when I was young, and I was able to draw my own conclusions and beliefs from these teachings. As a result, I consider my beliefs a hybrid of the two religions.

Many people will not consider marrying outside of their own religion. While this is a personal choice, there are benefits to being in a dual religion household.

Many religious organizations, and religious people, have a very narrow view of religion as a whole. This exposure has widened my view since childhood and has allowed me to understand religion on a deeper level then most.

There are disadvantages than can occur when being raised in a dual religion household. There are times, when I was younger, that I forgot which religion believed what. It sometimes made my Catholic School experience harder then it should have been.

Dual religion households can sometimes cause issues when there is a difference of opinion over a certain religious issue. These arguments can confuse and scare a child. This difference has to be worked out immediately before any other issue since it is a faith-based issue.

Deciding which Church will receive more money in contributions every week can also be a difficult obstacle to overcome. If a set amount is given to both each week, then this should be easy to overcome.

Arguments like this can also scare a child. If the child finds out that more money is being given to one church then the other, a relation may be made in the child's mind that one religion is more important then the other.

I am very happy that I was able to grow up in a dual religion household. There are benefits that I will reap for the rest of my life.